There is a thing, formless yet complete. Before heaven and earth it existed. We do not know its name, but we call it Tao. It is the Mystery of Mysteries. 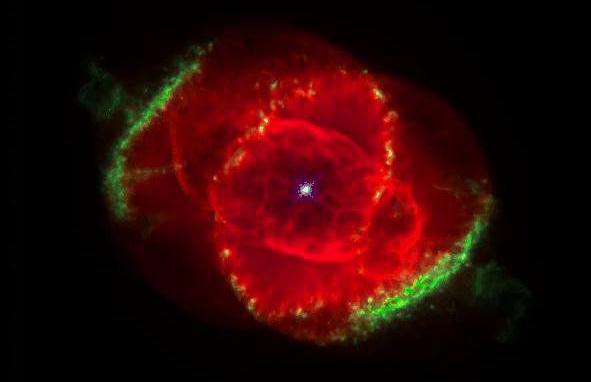 Planetary nebula NGC 6543, shells and jets of gas ejected from the death throes of a star one thousand years ago. Photo: J.P. Harrington and K.J. Borkowski, Hubble Space Telescope, NASA.

The Tao te Ching is the oldest scripture of Taoism. It was composed during the warring states period when China descended into a chaos of rival kingdoms, some time between the sixth and the fourth or third centuries BC. It was supposedly written by Lao Tan, a possibly mythical figure, said to have lived till he was 160 or 200 years old.

The classical Chinese historian Ssuma Chien says the work was by Li Erh, a custodian of imperial archives from the state of Ch’u in southern China, in the present province of Honan. This was a fertile, well-watered state. “Its people make little exertion, delight in life, and neglect to store anything.”

Li Erh was no seeker after fame. “The chief aim of his studies was how to keep himself concealed and remain unknown.” says Ssuma Chien. Li Erh wrote his ideas only because, as he was heading into retirement, the royal gatekeeper pleaded with him to record his ideas before he disappeared into oblivion. He may have written the book under the pseudonym Lao Tan to avoid attention.

A brutally honest personal confession in the Tao te Ching [chapter 20] suggests that he was not always happy with his reclusive way of life and personality:

I alone am inert, showing no sign of desires,
like an infant that has not yet smiled.
Wearied, indeed, I seem to be without a home.
The multitude all possess more than enough,
I alone seem to have lost all …
Common folks are indeed brilliant;
I alone seem to be in the dark.

The Tao te Ching is a short, dense book of only 5,250 words – probably the most influential 5,250 words ever written. Its ideas became very popular under the Han dynasty in the second century BC.

Lao Tan/Li Erh was even said to have met Confucius. After one visit Confucius’ disciples asked him how he was able to correct and admonish Lao Tzu. “In him I have seen the dragon that rides on the cloudy air,” replied Confucius. “My mouth fell open and I was unable to shut it; how could I admonish and correct Lao Tan?” After another crushing visit he admitted: “In the knowledge of the Tao am I any better than a tiny creature in vinegar?” A final episode shows him becoming virtually a disciple of Lao Tzu.

These accounts are, of course, Taoist propaganda. In reality Confucius would have regarded Lao Tzu as a dangerous threat to established custom and filial piety. The Tao te Ching contains not a single word about either of these central Confucian concepts. Indeed by stressing spontaneity and harmony with nature, it represents a rebellion against Confucian obsession with form and duty.

But Taoism did alter the course of Confucianism, leading to the synthesis of neo-Confucianism in thinkers like Chang Tsai. It also moulded the shape of East Asian Buddhism, giving Buddhism a much less negative stance to the world.

Was Lao Tan/Li Erh a pantheist? His description of the reality of the Tao is of a mysterious, numinous unity underlying and sustaining all things. It is inaccessible to normal thought, language or perception. While he never calls the Tao a God, and rejects the idea that it is personal or concerned with humans, he clearly views it in the same light of awe and respect as believers view their Gods. Since the Tao is omnipresent and sustains everything, the Tao te Ching is clearly espousing a materialist form of pantheism.

The Tao te Ching does not fall into the trap of Buddhism, assuming that because there is an underlying unity the diversity of the world is an illusion and there is only “emptiness.” It recognizes both being and non-being as complementary. Non-being defines being as dark outlines light. Being and diversity emanate from non-being.

Lao Tan/Li Erh also believed that human happiness consisted in understanding and living and acting in harmony with this underlying Reality. This means following a simple, frugal and peaceful way of life, not seeking after wealth, power or fame. Unlike the Chuang Tzu he is not an advocate of total withdrawal from public action. But he stresses the need for taking minimal action. He prefers non-violence over violence, softness over hardness, water over sharpened swords. He is a clear pre-cursor of both Jesus and Gandhi.

In government his philosophy makes him in certain ways Machiavellian and laissez-faire. Kings should not encourage learning, wisdom or virtue. They should fill their people’s bellies and keep their minds empty. A happy country would be one where people could hear dogs barking in the next village, yet would have no desire to go there.

There are also repeated suggestions through the text that the sage can achieve long life and escape death. This gave rise to a much less philosophical aspect of later Taoism: the pursuit of everlasting life, not in heaven but on this earth, but through physical immortality, and by often magical means.

There are dozens of translations of the Tao te Ching, many of them radically different from one another. Unless otherwise indicated, the texts below are from Wing-Tsit Chan in A Sourcebook in Chinese Philosophy, Princeton University Press, New Jersey, 1969. Additional biographical material from Fung-Yu Lan, A History of Chinese Philosophy, trs Derk Bodde, Princeton University Press, New Jersey, 1952, and James Legge, The Texts of Taoism, Sacred Books of the East vol 40, Dover, New York, 1962.

Nature of the Tao

Origin of all things.

There is a thing, formless yet complete.
Before heaven and earth it existed.
Without sound, without substance,
it stands alone and unchanging.
It is all-pervading and unfailing.
One may think of it as the mother of all beneath Heaven.
We do not know its name, but we call it Tao.
25. [Bodde].

Deep and still, it seems to have existed forever.
4.

Sustainer of all things.

Tao is incomprehensible to us by normal means or language.

Tao is both being and non-being.

Being and Non-being produce each other.

When the people of the world all know beauty as beauty,
There arises the recognition of ugliness.
When they know the good as the good,
There arises the perception of evil.
Therefore Being and non-Being produce each other.
2.

Tao invariably takes no action, and yet there is nothing left undone.
37.

Tao is indifferent to human affairs.

Heaven and earth are not humane.
They regard all things as straw dogs.
5.

Following the Tao in human affairs

Success in human affairs depends on understanding and following the nature of the Tao.

Hold on to the Tao of old in order to master the things of the present.
14.

To hold and fill to overflowing
is not as good as to stop in time.
Sharpen a sword-edge to its very sharpest,
And the edge will not last long …
Withdraw as soon as your work is done.
Such is Heaven’s Way.
9.

The weak and the tender overcome the hard and the strong.
36.

To yield is to be preserved whole.
To be bent is to become straight.
To be empty is to be full …
To have little is to possess.
22.

The use of force usually brings requital.
Wherever armies are stationed, briers and thorns grow.
Great wars are always followed by famines.
30.

Weapons are instruments of evil, not the instruments of a good ruler.
When he uses them unavoidably, he regards calm restraint as the best principle.
Even when he is victorious, he does not regard it as praiseworthy,
For to praise victory is to delight in the slaughter of men.
31.

Turn the other cheek.

Whether it is big or small, many or few, repay hatred with virtue.
63.

Return to the root.

Attain complete emptiness,
Maintain steadfast quietude.
All things flourish
But each one returns to its root.
This return to its root means tranquility.
16.

He who hoards most will lose heavily,
He who is contented suffers no disgrace.
44.

The courts are exceedingly splendid,
while the fields are exceedingly weedy,
and the granaries are exceedingly empty.
Elegant clothes are worn,
sharp weapons are carried,
Foods and drinks are enjoyed beyond limit,
And wealth and treasures are accumulated in excess.
This is robbery and extravagance.
This is indeed not the Tao.
53.

Philosophical Taoism overlaps in many respects with Scientific Pantheism. Both are non-dualist, and deny that spirit and matter are separate substances. Both are non-theist, and deny the existence of any personal creator God or supernatural realm. Yet both have a deeply religious reverence for nature and the universe. Both stress the importance of living in harmony with nature. If you are attracted to the Taoism of Lao Tzu and Chuang Tzu, then you will find scientific pantheism totally congenial.

There are of course some differences. Unlike Chuang Tzu, Scientific Pantheism does not advocate social inaction, and does not assume that there is an ultimate reality beyond the material universe (though it does not deny the possibility of this). Scientific Pantheism is completely free of the later accretions of religious Taoism: the alchemical pursuit of physical immortality, the multiplicity of deities and so on.
Scientific Pantheism recognizes the right of all pantheists to celebrate their beliefs in any ritual or symbolic form they prefer: so it is entirely possible to be a scientific pantheist and a Taoist at the same time, and many of our members are.