The cosmos is a roaring fire of Being. If we stare into its furnace fearfully, then it can seem a monstrous and menacing force. But if we look with wonder, then it can become an ocean of waves on which we can surf magnificently. 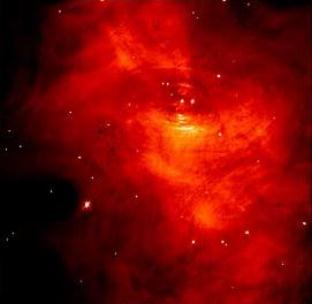 Central portion of the supernova at the heart of the Crab Nebula,
which exploded in 1054 AD. HST image.

Most of the traditional attributes of God in major world religions are based on the real properties of the cosmos: mystery, power, creation, eternity, infinity, omnipresence and so on. Judaism, Christianity and Islam also assume a number of imaginary attributes based in individual desires or social needs: love, mercy, justice and so on.

But if we accept that the cosmos is divine, we have to admit that the divinity of the Real has other traits which most religions do not acknowledge. These include:

These are often negative attributes - at least when seen from the point of view of conventional religion, or of anxious people seeking a long and comfortable life.

But if we believe in openness to evidence, we have no choice but to accept their reality and to live with them. Indeed if we fully accept the reality of the cosmos, we can learn to accept them.

The cosmos is in constant flux.

Heraclitus remarked that we never step into the same river twice. He might have added: it is never the same "we" which steps into the river twice. The molecules that make up our bodies rearrange themselves from one second to the next.

For Plato, who grew up in a time of plague, warfare and political turmoil, the flux of reality was terrifying. All existence, he wrote, hurried up and down in never-ceasing ebb and flow like the tidal currents in the Euripus. [Phaedo 90c] Plato sought refuge from flux, in an illusory world of eternal unchanging ideas.

But we can learn to live with, even to love, this constant change.

The cosmos can be randomly destructive

Change is creative, but it is also destructive.

The destructive powers unleashed in the cosmos are awesome. Explosions and collisions are routine. Most of the moons in the solar system are scarred like smallpox victims with the impact craters of meteorites.

Galaxies collide, passing through each other, disrupting stars and planetary systems and any life that might be on them. Stars explode in supernovae.

Life on earth has suffered its share of catastrophes. In the last 600 million years there have been five massive holocausts of biodiversity, and eleven other mass extinctions of major extent. The great Permian extinction, some 250 million years ago wiped out 90 per cent of all pre-existing species. At the end of the Cretaceous period, 65 million years ago, 60 to 75 per cent of species were killed off, including most of the dinosaurs, large marine reptiles, ammonites and flying pterosaurs. [Scientific American, July 1996]

The cosmos is infinitely creative

Change is destructive, but it is also creative.

The cosmos, and life on earth, are continually pulling down old forms and trying out new, like a potter who mangles a botched creation on the wheel to start a new one.

The cosmos is at play like a child. It improvises movements, like a dancer. Other than sheer exuberance there is no aim and no goal in this.

Yet there is a kind of progress. We are not talking about progress towards humanity as the pinnacle of creation. But there is evolution, in physical and in biological systems. Progress is towards a better fit between individuals and their environment. Those entities - species, societies, scientific theories - that are not adapted to their environment are destroyed. Those that are adapted survive.

Destruction and creation are two sides of the same coin

Destruction and creation are inseparably linked.

Without destruction there could be no new creation. Everything would be irrevocably fixed for all time.

Massive destruction paved the way for the emergence of humans. The heavier elements, including carbon, oxygen and nitrogen, build up as stars burn helium and hydrogen. Supernovae scatter the products throughout galaxies, where they become building blocks for life.

Mass extinctions vacate swathes of niches into which new species can expand. If the dinosaurs had not died out, mammals would have been unable to radiate, and we might still be tree shrews dodging the lumbering feet of brachiosaurs.

Since 1945 natural catastrophes like these have killed more people than human-originated disasters such as war, fire or accident. They cannot be put down to human evil, nor is it possible to twist or dodge the question so as to exonerate "God." If God exists and is all-powerful, he is responsible. If he sends these trials to make us better people, why does he not send them to all? In fact they strike good and bad alike. They create personal tragedy and lasting trauma, and these far outweigh any educative effect.

We live on the skin of a Kraken which can wake and plunge to the depths with all of us on her back.

Change is not arbitrary: it obeys physical laws. But there is a strong element of randomness and of unpredictability about it.

Randomness and indeterminacy are at the heart of sub-atomic reality. Quantum physics tells us that fundamental particles can undergo sudden and unpredictable change without cause.

Unpredictability intrudes at larger scales where most systems are fluid and chaotic. The movements of ocean waves or clouds are chaotic and unpredictable even over the medium term. On longer time-scales the movement of currents in earth's magma, of stars in the arms of galaxies, or of galaxies and clusters of galaxies, are chaotic.

We humans live in a quiet storey of a dangerous and turbulent tower block. At bigger and at smaller scales of space and time, events are governed by randomness. Outcomes are uncertain, risk is endemic, and all sensible bets are off.

The immensity of the cosmos dwarfs human existence

According to theistic religions like Judaism, Christianity and Islam, the human race is the central purpose of creation.

This view came under challenge when Copernicus proposed that the earth might go round the sun. In the 1920s Edwin Hubble proved that the Milky Way was just one of many galaxies in the cosmos. The images of the Hubble Space Telescope show that the heavens are sown with galaxies as thick as poppy seed. In the age of Hubble, the idea of the centrality of the human race is untenable.

The known universe is estimated to be between 10 and 20 billion years old. It passed through at least 99.99997 per cent of its history to date before homo sapiens emerged on earth.

Estimates of the incidence of intelligent life vary enormously. Recent discoveries suggest that half of nearby stars may have gas disks which could accrete into planets, and most of these may have at least one planet with water. Space is seeded with organic molecules that could sow life on any suitable planet.

Altogether there may be as many as 20 billion planets in our own galaxy that harbour life. We have no idea how many have evolved intelligent life. The answer depends heavily on the odds we give to various probabilities. But it seems likely that there might have been between 100,000 and a billion planets in our galaxy alone which have had intelligent life at some time or other.

This cannot be reconciled with a God for whom humans are supremely important. Our solar system makes up an infinitesimal part of the visible universe. To create this immensity of time and space simply to make a tiny stage for the destiny of one species would be redundancy on a colossal scale.

The truth is that while we reign supreme on earth, we are only a minute fragment of the universe that is everything to us.

The cosmos is impersonal in any human sense

These forces, processes and scales are not in any way friendly to the human race. They cannot be squared with the idea of an omniscient, loving, forgiving and personal God, concerned with each one of us, who metes out our fates according to careful justice. Indeed belief in such a God can only be maintained if these facts and their true import are ignored.

Often they seem much more in keeping with the pre-exile Old Testament idea of Jehovah - a wrathful, sometimes dangerous God of terrifying power, who does not hesitate to persecute an individual like Job - or to wipe out thousands of innocent people if the whim takes him. But that concept too is an oversimplification.

The roaring fire of Being

For the cosmos is neither loving nor wrathful.

It is a roaring, ever changing fire of Being.

If we stare into its furnace fearfully, then it can only seem like a monstrous and menacing force, and we will take refuge in imaginary deities and imaginary heavens.

But if we look with acceptance and wonder, then it can seem like an ocean driving towering waves on which we can surf magnificently, for the brief while that we are distinct from the ocean itself. If we die riding them, then at least we will have lived in exhilaration.

1. Disaster statistics: personal communication from the Centre for Research on the Epidemiology of Disasters, University of Louvain. Back.

2. This result is based on material from the debate between Carl Sagan and Ernst Mayr on the search for extra-terrestrial intelligence [Bioastronomy News, vol. 7, nos 3 and 4, 1995.] Note that the calculation for theological purposes stops at the probability of intelligent life developing. It does not include the probablities of an intelligent civilization lasting, or developing means to contact other intelligent species. Back.