I have visited in my wanderings shrines and other places of pilgrimage, But I have not seen another shrine blissful like my own body. 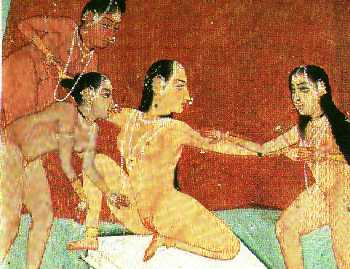 At first sight nothing seems more alien to the oldest form of Buddhism, Theravada, than Tantric Buddhism. Where Theravada urges us to reflect on the repulsiveness of the body, Tantric Buddhism tells us to revere it as a temple and to indulge its most sensual impulses. Theravada preaches the renunciation of all desires: Tantric Buddhism their over-fulfillment.

These are very real and significant differences. If we regard nirvana as an ultimate reality which is revered as virtually divine, then most Mahayana schools of Buddhism are pantheisms of the world-rejecting and world-denying varieties (see Varieties of Pantheism). Tantric Buddhism is a pantheism of the world-accepting variety which sees nirvana in the midst of sense-phenomena.

Tantric Buddhism also laid great emphasis on mantras (incantations), on mudras (symbolic gestures) and on mandalas (symbolic diagrams of deities and cosmic forces), as well as on magic and a multiplicity of deities.

Yet it has two major points in common with its parent.

The first is that it aims at the abandonment or transcendence of the self. Once again, its favoured method - the ecstasy of ritual sexual intercourse and orgasm - is quite foreign to Theravada Buddhism. The Buddha scolded his pupil Ananda for giving in to female attractions.

However, some groups did practise the rituals literally and in the flesh. These are likely to have been primarily males of the higher classes, who could buy lower-caste women or high-class prostitutes to do what they liked with, or landless castes, who had no property to pass on, and for whom female virginity was less critical.

Tantric Buddhism shares another factor with many schools of Mahayana Buddhism. It claims that the existence of the physical world is illusory, and therefore there is no difference between samsara (the world of transmigration and shifting appearances) and nirvana.

If this is true, then all we need to be liberated is to realize it. As long as we do so, it makes no difference how we act. We can rape, murder, commit incest - as some of the more extreme Tantric texts encourage - and we will remain undefiled by the world of illusion. In this amoral position Tantric teachings resembled those of the Nicolaitan Gnostics and the Brethren of the Free Spirit.

Tantric sex rituals were elaborate. In the chakrapuja between eight and forty eight male and female celebrants gather and take cannabis. The priest anoints and has intercourse with a nude young girl, retaining his semen for the congregation to drink. Feasting and drinking follow, and the ceremony ends in ritual copulation accompanied by reciting of mantras. The purpose (allegedly) is not to have a good time, but to use sexual union and orgasm as a way to extinction of the self and fusion with the underlying reality and unity.

Tantric Buddhism probably began around 300 AD as an esoteric development among small circles of initiates, passed down from guru to pupil. It gathered momentum after 600 AD, and was espoused by the rulers of a kingdom known as Uddyana (possibly around Peshawar in modern Pakistan) and by the Pala dynasty in Bengal (750-1150). It was largely suppressed during the Moghul period.

The quotations are from the Treasury of Songs by Saraha, written in the eleventh or twelfth century AD, in Edward Conze et al eds, Buddhist Texts through the Ages, Harper Torchbooks, 1964.

The additional passages are from the seventh century Cittavisuddhiprakarana, of Aryadeva, cited in W. T. de Bary, The Buddhist Tradition, Vintage Books, 1972.

Identity of the world (samsara) and nirvana.

Mind is the origin of all things.
Mind is the universal seed,
Both samsara and nirvana spring forth from it. [41.]

As is nirvana, so is samsara.
Do not think there is any distinction.
Yet it possesses no single nature
For I know it as quite pure. [102]

Here there is no beginning, no middle, no end,
Neither samsara nor nirvana.
In this state of highest bliss
There is neither self nor other. [27]

Whatever you see, that is it,
In front, behind, in all the ten directions. [28]

One should not think of molecules or atoms;
It is this supreme bliss that pours forth unceasingly as existence. [61]

Do not sit at home, do not go to the forest,
But recognize mind wherever you are.
When one abides in complete and perfect enlightenment,
When samsara and where is nirvana?

Unity of self and other.

"This is myself and this is another."
Be free of this bond which encompasses you about,
and your own self is thereby released.
Everything is Buddha without exception. [104-105]

Do not discriminate, but see things as one,
Making no distinction of families. [26]

Do not then conceive differences in yourself.
When there is no distinction between body, speech and mind,
Then the true nature of the Innate shines forth.

I have visited in my wanderings shrines and other places of pilgrimage,
But I have not seen another shrine blissful like my own body. [48]

Eat and drink, indulge the senses,
Fill the mandala (with offerings) again and again,
By things like these you'll gain the world beyond.
[24]

Even as water entering water
Has the same savour,
So faults and virtues are accounted the same
As there is no opposition between them. [74]

The supreme bliss of orgasm.

There is neither passion nor absence of passion.
Seated beside her own, her mind destroyed,
Thus I have seen the yogini. [85]

That blissful delight that consists between lotus [vagina] and vajra [thunderbolt, ie, penis],
Who does not rejoice there?
This moment may be the bliss of means, or of both wisdom and means . .
It is profound, it is vast.
it is neither self nor other …
Even as the moon makes light in black darkness,
So in one moment the supreme bliss removes all defilement.
When the sun of suffering has set,
Then arises this bliss, this lord of the stars.
It creates with continuous creativity,
And of this comes the mandala circle [of the cosmos].
Gain purification in bliss supreme,
For here lies final perfection.[94-98]

Thought bound brings bondage, and released brings release,
there's no doubt of that.[42]

When bound, it dashes in all directions,
But released, it stays still.
Consider the camel, friend.
I see there a similar paradox. [43]

"One fixes the eyes, obstructs the thought, restrains the breath.
That is the teaching of our lord and master."
But when the flow of his breath is quite motionless,
And the yogin is dead, what then? [66]

The Jain monks mock the Way with their appearance,
With their long nails and their filthy clothes,
Or naked and dishevelled hair,
Enslaving themselves with their doctrine of release. [6]

The purification of the intellect (Cittavisuddhiprakarana.

As a clear crystal assumes
The colour of another object,
So the jewel of the mind is colored
With the hue of what it imagines.

The jewel of the mind is naturally devoid
Of the colour of these ideas.
Originally pure, unoriginated,
Impersonal, and without stain.

So with all one's might, one should do
Whatever fools condemn,
And, since one's mind is pure,
Dwell in union with one's divinity.

The mystics, pure of mind,
Dally with lovely girls,
Infatuated with the poisonous flame of passion,
That they may be set free from desire …

The mystic duly dwells
On the manifold merits of his divinity
He delight in thoughts of passion,
And by the enjoyment of passion is set free.

As a washerman uses dirt
to wash clean a garment,
So, with impurity,
The wise man makes himself pure.

If you would like to spread the message of scientific pantheism please include a link to Pantheist pages in your pages and consult the Help spread Pantheism page.