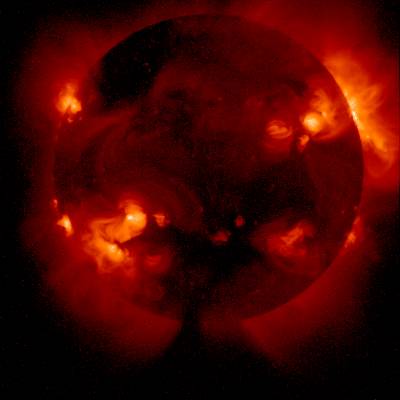 X-ray image of the sun

Thou art the dark-blue bird and the green parrot with red eyes,
Thou hast the lightning as thy child.
Thou art the seasons and the seas. [Svetasvatara 4.2.4]

The Upanishads are a collection of Indian speculations on the nature of reality and the soul and the relations between these two.
The texts date from around 600 BC. They often give the impression of a building under construction - an ongoing exploration of themes not yet fully resolved. No strictly coherent scheme can be extracted from the upanishads - not even from each single upanishad. Like the Bhagavad Gita they are the work of several hands.
If one theme unites these writings, it is the search for an underlying unity linking everything we see and think. That unity is called Brahman. In most texts, Brahman is said to be identical with Atman, the world soul, which is also identical with the atman of each individual. In this sense every individual is united with the cosmos, and only needs to realize this fact to reach fulfillment.
The upanishads are, thus, essentially pantheistic. However, their quest for unity went at times too far. Since the world we see is clearly highly diverse, some texts deduce that if the cosmos is unitary, then appearances must be delusory. They are maya - like a magical trick. The self, the presence of the cosmic Self within each person, is the `Real' world - a world of pure thought, which cannot be apprehended by the senses. Meanwhile the real sensible world of life and love, birth and death, is dismissed as no more than a dream projected by the self. Once a person realizes this, the illusion falls away and they become one with the All.
This view - similar in essence to most schools of Buddhism - contrasts strongly with realistic pantheisms which accept the material world as real. Idealistic pantheism fails to explain why we all dream the same dream - why the detail of the sensible world is shared by everyone present. It cannot explain why we should start to `dream' the world at all, nor why there should be a `we' to dream.
The belief that reality is illusion is perhaps the greatest illusion of all. It leads to indifference, inaction, insensitivity, world-blindness, death in life. Indeed in the upanishads all these are praised as the highest wisdom.
No life can be led in an illusory world - even hermits and monks have to eat, excrete, and sleep. Thus they are forced to acknowledge in action the reality of the world they deny in theory, and their own lives disprove their beliefs. The only life that is consistent with full acceptance of idealist pantheism is a hunger strike until death. The sage who wishes to survive another day must forget his wisdom.

The extracts are from Robert Hume, The Thirteen Principal Upanishads, Oxford University Press, 1931.

Brahman is the whole world.

Thou art the dark-blue bird and the green parrot with red eyes,
Thou hast the lightning as thy child. Thou art the seasons and the seas.
Having no beginning, thou dost abide with all-pervadingness,
Wherefrom all beings are born. [Svetasvatara 4.2.4]

Verily, this whole world in Brahman. Tranquil, let one worship it as that from which he came forth, as that into which he will be dissolved, as that in which he breathes. [Chandogya 3.14.1]

Atman, the world-soul, is the whole world.

Fire is His head; His eyes, the moon and sun; the regions of space, His ears; His voice, the revealed Vedas; Wind, His breath; His heart, the whole world. Out of His feet, the earth. Truly He is the Inner Soul of all. [Mundaka 2.2.4]

Atman and Brahman are identical.

The Soul (Atman) which pervades all things . . this is Brahman. [Svetasvatara 1.16]

This Soul (Atman) is Brahman, made of knowledge, of mind, of breath, of seeing, of hearing, of earth, of water, of wind, of space, of energy and of non-energy, of desire and of non-desire, of anger and of non-anger, of virtue and of non-virtue. It is made of everything. [Brihadaranyaka 4.4.5]

The individual soul is indentical with Brahman/Atman.

The light which shines higher than this heaven . . verily, that is the same as the light which is here within a person. [Chandogya 3.13.7]

He who breathes in with your breathing is the Soul of yours which is in all things. [Brihadaranyaka 3.4.1]

As far, verily, as this world-space extends, so far extends the space within the heart. Within it are contained both heaven and earth, both fire and wind, both sun and moon, lightning and the stars, both what one possesses here and what one does not possess; everything here is contained within it… That is the Soul, free from evil, free from age, free from death, free from sorrow, free from hunger, free from thirst, whose desire is the Real, whose conception is the Real. [Chandogya 8.1.3-4]

The diversity of appearances is an illusion.

There is on earth no diversity.
He gets death after death
Who perceives here seeming diversity.
As a unity only is It to be looked upon -
this indemonstrable, enduring Being.
[Brihadaranyaka 4.4.19-20]

This whole world the illusion maker projects out of this [Brahman].
And in it by illusion the other is confined.
Now, one should know that Nature is illusion,
And that the Mighty Lord is the illusion maker.
[Svetasvatara 4.9-10]

The true Brahman is beyond understanding by words or concepts.

It is to be known through thought - not senses.

Not by sight is It grasped, not even by speech,
Not by any other sense-organs, austerity, or work . .
That subtile Soul is to be known by thought.
[Mundaka 3.1.8-9]

Knowledge and inaction are better than action.

Having scrutinized the worlds that are built up by work, a Brahman should arrive at indifference. The world that was not made is not won by what is done. [Mundaka 1.12].

Knowing the unity of self and world is liberation

Whoever thus knows `I am Brahman!' becomes this all; even the gods have no power to prevent him becoming thus, for he becomes their self. [Brihadaranyaka 1.4.10]

This unity is beyond dualism and beyond normal cognition.

Death is the ultimate union of self and All.

When a person is dying, his voice goes into his mind; his mind into his breath; his breath into heat; the heat into the highest divinity. that which is the finest essence - the whole world has that as its soul. That is Reality. That is Atman. That art thou, Svetaketu. [Chanodgya 6.8.6]

Death is better than life.

When one has come into the presence of undecaying immortals,
What decaying mortal here below, who understands,
who meditates on the pleasures of beauty and delight,
Would delight in a life over-long? [Katha 1.28]

When are cut all the knots of the heart here on earth, then a mortal becomes immortal! [Katha 6.15]

Background image: solar disc in randomized false colours to symbolize that in the Upanishads, sensible reality is considered to be the veil of true `Reality' which is formless.

is the belief that the universe and nature are divine.
It fuses religion and science, and concern for humans with concern for nature.
It provides the most realistic concept of life after death,
and the most solid basis for environmental ethics.
It is a religion that requires no faith other than common sense,
no revelation other than open eyes and a mind open to evidence,
no guru other than your own self.