Pantheism and paganism: a symbiosis.

Pantheism and paganism are soul sisters.
Pantheism is the deep theology of modern paganism.
Paganism can offer much of the ceremony and ritual that pantheism needs. 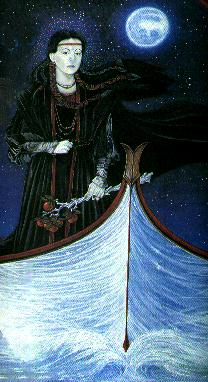 This article was first published in Pagan Dawn, Summer 1997.

There is a close link between pantheism and modern paganism. Many pagans proclaim themselves to be pantheists. "I embrace Pantheism, acknowledging that the Divine is everywhere and in everything" says Selena Fox in I am a Pagan. "My worship takes the form of Divine communion with Nature."

"The world is holy," writes Margot Adler in Drawing down the Moon. "Nature is holy. The body is holy. Sexuality is holy. The mind is holy. The imagination is holy. You are holy....Thou art Goddess. Thou art God. Divinity is immanent in all Nature. It is as much within you as without."

On its Web page, the pagan Church of All Worlds says it "embraces the theology of pantheism, as we experience what has been called `God,' as an immanent quality inherently manifest in every living Being, from a single cell to an entire planet--and likely the universe itself."

Finally, could there be a more beautiful expression of pantheism than Wiccan Doreen Valiente's Charge of the Goddess:

I who am the beauty of the green earth,
and the white moon among the stars,
and the mystery of the waters,
call unto thy soul:
Arise, and come unto me.
For I am the soul of nature, who gives life to the universe.
From Me all things proceed,
and unto Me all things must return;
and before My face, beloved of gods and of men,
let thine innermost divine self be
enfolded in the rapture of the infinite.
Let My worship be within the heart that rejoices;
for behold, all acts of love and pleasure are My rituals.

Pantheists are not always pagans.

But pantheism and paganism have not always been so closely linked. The word pagan was already in use in the later Roman empire, to mean a non- Christian believer in the traditional pantheon of Rome.

The name pantheism was not used before the early eighteenth century - but the belief that nature and the universe are divine can be dated back to the Greek philosopher Heraklitus of Ephesus. "The cosmos is, and was, and always will be ever living fire," he wrote. Heraklitus was no pagan: he had nothing but contempt for the worship of "statues" and for the Bacchic Mysteries of Dionysos.

The strongest school of pantheists were the Stoics, founded in the fourth century BC. They included Epictetus, Seneca and the Roman emperor Marcus Aurelius. Though many of them called their cosmic divinity Zeus, they thought of it as the totality of the material universe. They were not polytheists.

Modern pantheism has had many distinguished representatives, ranging from Spinoza through the Lakeland poets to Albert Einstein and Gene Roddenberry. These well-known pantheists, however, were not pagans either.

First of all, the times are a'changing. The rise of pantheistic religions is one of the key religious trends in the West. Not just pure pantheism, but a whole range of religions that see divinity out there in front of our noses, in nature and the night sky: Taoism, Zen Buddhism, paganism, deep ecology, Native American religions, or forms of Christianity verging on pantheism such as Creation Spirituality.

This pantheistic wave is fed by the destruction of nature and the earth proceeding all around us - the more we risk losing it, the more of us realize how deeply we value it. Many of us too are fed up with life-hating religions from ancient times that tell us that this earth is no more than a staging post on the road to heaven, and this body is just a cage for our eternal souls.

Love of nature, and feelings of a pervasive divinity in nature and in ourselves, are possibly the strongest reasons why many people are attracted to paganism in the first place. I would guess that for most people the need for a religion that affirms life, the body, sex, nature and the universe is more powerful than the need to have a variety of gods to worship. Pantheism is instinctive: it is every child's reaction of wonder to the world around it. Polytheism comes later, if at all, and it is learned.

Many modern pagans regard Goddess and God, or gods and goddesses not as real literal entities with distinct powers, but as symbols or aspects of the one Divinity of nature, expressed in different forms in land, sea and sky.

If you regard natural reality as divine, and learn to look at it in a different way, then you do begin to see a numinous quality not just in the whole universe, but also in many particular things - in the ocean, in mountain streams, in deer, in trees, in the sun. It's tempting then to personify the divinity of each of these.

With enormous unified wholes like the sun, nature or the ocean, this is natural and harmless. They can be acknowledged as centres of numinous power without losing any of our ability to perceive each one of them directly. However, if we think of them as disguised human-type deities, there may be a risk of not seeing them as they are, but of anthropomorphizing them.

There are perhaps dangers in believing literally in too many subsidiary deities. If someone loves one particular tree, then it is that tree that possesses a numinous quality for them. If they look at that one tree and think "the god of trees is in there," then to some extent they are blanking out the particular tree in a grand abstraction. They may not perceive it in its vibrant unique individuality. From this point of view, animism - believing that each natural thing has its own individual spark of divinity - presents fewer risks. Pantheism is quite compatible with a sophisticated animism.

Pantheism, in other words, is perfectly compatible with a purely symbolic or playful use of gods and goddesses of nature, as long as the user remains fully aware that these are merely symbols for a deeper reality and never allows them to obscure their intense perception of everything in the real world in all its individuality and uniqueness. But pantheism is not compatible with literal belief in multiple gods and goddesses, even if the believer feels that these are only subsidiary deities. Literal polytheism is simply that: polytheism. It is not pantheism.

What pantheism can offer to paganism is a coherent way of looking at the divinity of nature and the universe - a solid rock to stand on, if you like, while experimenting with all the varied and playful ways of celebrating divinity that paganism can offer.

Straight pantheists have been very weak on the ceremony and ritual front. They have usually been more interested in philosophy. This has been perhaps the central weakness of pantheism, the real reason why pure pantheism never got moving as an organized (or even a disorganized) religion.

Most people feel a need for religious ceremony and ritual. It gives them a sense of belonging. It allows them to join with others who share their beliefs, and to express their beliefs in a concrete way. At the decisive stages of life - birth, maturity, marriage, death - ceremony helps to link the individual with the progression of life as a whole.

So pantheism needs ceremony and ritual if it is ever to get moving as a religion. Now if you sat down with a blank sheet of paper and tried to invent pantheist sacred times from scratch, as an exercise, then the equinoxes and solstices would be compulsory choices.

You would probably add key agricultural dates - planting, harvesting, gathering fruits - though these would vary from one place to another. A day of the dead would come in handy for remembering lost loved ones, and ancestors in general.

But these feasts exist already in the pagan year. They represent celebrations that have been held for thousands of years to cement our links with nature. There is no need to start from scratch. The job has been done, and the link with the past is worth retaining for those who appreciate it.

One might also add in some more occasions for special marking or special awareness - the monthly lunar-tide-female cycle, the daily solar cycle. Personally I feel that the times in the year when we are blessed with showers of shooting stars (the Perseids, peaking in early August, and the Geminids, peaking in the second week in December) should become annual festivals.

Of course, we all do different things at those times, but for all of us they are alive with significance. At all these times we are reminded powerfully of how we are linked with nature, and how nature is linked with the rhythms of the solar system.

The tricky question of magic

Magic is not focal or central to paganism. Pagans can be pagans without using or believing in magic.

The association of paganism and magic is to some extent a historical accident. And from the point of view of the scientific pantheist, this association is unfortunate.

So scientific pantheism would be obliged to keep an open mind about magic. Our minds can influence our own bodies, our actions, our determination, our focus and concentration. We may also become more persuasive, more able to influence others to do as we would like. If we "psych" ourselves up sufficiently, we are often capable of feats that seemed almost impossible.

But can our minds control matter, other than our own bodies, directly? Can they influence other minds out of our physical reach, just by thinking? If these things were possible, it would mean that the human mind were separate from matter, and able to move through time and space independently of the body. To accept this would involve a radical rethink of the scientific pantheist outlook, of science as a whole, and of most people's normal ways of looking at the world.

As Carl Sagan remarked: "Extraordinary claims require extraordinary evidence." Before the reality of magic is regarded as fact, before we radically revise science and philosophy, there would have to be the most rigorous and repeated tests showing a clear effect, far beyond what could be expected by chance. Until such evidence is available, the empirical pantheist would do well to withhold believe in magic.

It may well be that, even when magic appears to be successful, other explanations are much more likely. For example, humans regularly overestimate the odds against many types of coincidence in a world with 5,700 million inhabitants, and may attribute coincidence to the workings of providence or of magic. We may forget the times when things didn't work out the way we wanted, more readily than we forget the times when they did.

Pantheism and paganism: A symbiosis?

Many pagans have already embraced pantheism, and most would benefit by realizing that a nature-inspired pantheism probably underlies their attraction to paganism, and exploring pantheism further. Pantheism is the "deep theology" of paganism.

But perhaps pantheists should also accept aspects of pagan seasonal ceremony and ritual.

Paganism and pantheism are soul-sisters. Let everyone take what they like from each, and make their own synthesis.

is a profound feeling of reverence for Nature and the wider Universe
It fuses religion and science, and concern for humans with concern for nature.
It provides the most solid basis for environmental ethics.
It is a religion that requires no faith other than common sense,
no revelation other than open eyes and a mind open to evidence,
no guru other than your own self.
For an outline, see Basic principles of scientific pantheism.

Top.
If you would like to spread this message please include a link to Scientific Pantheism in your pages and consult the Help page.
Suggestions, comments, criticisms to: Paul Harrison, e-mail: pan(at)(this domain)
© Paul Harrison.