Theists who look at a forest, or at a cell, or at a galaxy, are contemplating the reflected glory of an invisible Creator. Pantheists are gazing on the unveiled face of divinity. 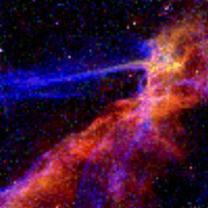 Shockwave from supernova in the Crab Nebula. Science and religion.
Faith versus certainty.
Gazing at the unveiled face of divinity.
Sticking to the evidence: the sacred duty of empiricism.
Cognitive openness: the sacred duty of constant revision.
Occam's razor: seeking the simplest explanation.

Since the Renaissance, science has driven back the bounds of religion.

Heaven was once thought to begin beyond the sphere of stars, just outside the orbit of Saturn. Modern telescopes have pushed the boundaries to the edge of the universe.

But theists no longer claim that God is just outside the last rim of the visible. God has moved to more secure accommodation - to an invisible fortress which shows not so much as a grain of mortar in the real world. Yet this is, paradoxically, His best defence. Because He cannot be inspected or measured His existence can never be disproved.

This immaterial God is quite safe against attack from science. Science can establish or disprove only testable statements and theories about the real world. It cannot endorse or discount any set of beliefs that are not testable.

In recent years scientists like Frank Tippler have begun to set themselves up as religious pundits and prophets, claiming that one scientific discovery after another "proves" the truth of God, the creation, immortality and so on. Their scientific credentials give them a spurious credibility. Of course they have a right to their beliefs and opinions. But they do not have the right to speak out on these matters in the name of science. By definition, nothing on earth or in the heavens - not even miraculous violations of natural law - can prove the existence of an immaterial entity. Even if the face of God appeared in the clouds to the whole world tomorrow, we still could not assume He was an immaterial entity.

It cleaves to the Real. It sticks to the evidence. It prefers certainty over faith. It prefers simple hypotheses over complex ones, and refuses to multiply unnecessary entities. It accepts the findings of science, and accepts that Reality can often be uncomfortable.

Pantheism asserts that Reality - the visible, audible, touchable, tasteable world of nature and the universe - is divine. That is, it possesses most of the qualities that believers in God claim for God (see God and the cosmos) and therefore should be revered and celebrated.

These qualities include power, mystery, awe, creation, omnipresence. Nature and the universe possess these qualities indisputably and empirically, whereas transcendental gods are only known to possess them - or to exist at all - through faith, revelation, and personal imagination. Everyone has seen the divine cosmos and the sacred earth. But few people - even among believers - claim to have seen God.

In this sense pantheism is scientific, whereas theism operates in a way that is counter to scientific method. We are not talking here about the content of faith, the specific beliefs about God or supernatural human powers. Most of these are not testable at the present time, and so many scientists have little trouble adhering to them. We are talking about the very nature of faith as faith. Faith means accepting the unbelievable, unprovable or illogical on the basis of evidence that no scientist would accept in science, and no prudent person would accept as the basis of a contract (see Faith.)

Gazing at the unveiled face of divinity.

If the Real is the divine, then just as theists try to know God better, pantheists should try to know Reality better by prolonged encounter and study.

For the pantheist science can be a deep expression of religion, as it was, for example, for Einstein. Of course this is possible for theists too. Kepler's belief that God designed the solar system on the basis of numerical harmonies led him to frame his laws of planetary orbits.

But the difference is this:

When theists look at a forest, or at a cell, or at a galaxy, they feel that they are contemplating the reflected glory of an invisible Creator, or they are staring at God's impenetrable veil.

When pantheists do so, they are directly witnessing the glory of divine Being. They are gazing on the unveiled face of divinity.

Sticking to the evidence: the sacred duty of empiricism.

With scientific pantheism, empiricism is one of the most sacred and binding duties. A pantheist who ignores evidence, or who is in any way closed to new evidence, is guilty of turning away from Reality.

By evidence we mean the sort of evidence that science and the senses deal with.

We mean direct experience of the sensible world, rather than the "experience" of unconfirmed hallucination or imagination, however powerful these may be for the individual. We mean experience that can be repeated by others, verified by others, rather than private experiences which are inaccessible to others.

Sometimes people who believe in God or heaven cite personal experience as "evidence." But they are not talking about the sort of evidence that science would accept, or that ordinary people would accept before signing a contract. They are talking about individual emotions or imaginations, experiences that cannot be repeated or verified by others at will.

Scientific pantheism accepts all evidence that is either a matter of common experience, or that is scientifically validated. It accepts uncomfortable findings - even those that contradict common sense, such as those of quantum physics - as long as they are fully validated. It faces up to uncomfortable truths. (See God and Reality).

As people grow older, they tend to form fixed beliefs which lock into self-reinforcing hierarchies, and become impervious to change. This applies most strongly to religious views. It applies to politics and ethnic relations. It applies inside academic disciplines.

Even scientific theories build themselves into paradigms, which tend to become dogmatic and resist new approaches as Thomas Kuhn has established. Only when a whole mass of contrary evidence accumulates does the old dam burst. Only when old professors retire or die can new theories rule the day.

We can call this tendency to closed minds "cognitive rigidity." It is one of the most dangerous and counter-productive traits of human personality.

Successful science seeks the simplest explanation for things - consistent with the evidence.

This "principle of economy" is also known as Occam's razor, after William of Occam, an influential English philosopher of the fourteenth century. In logical battles with scholastic philosophers Ockham applied the following rule:

[Entities are not to be multiplied beyond what is necessary.]

This principle has been fruitful in the history of science. To explain the retrograde motions of the planets, the Greek astronomer Ptolemy developed a system of `epicycles' - circular loops budding out of the main orbits. Eventually many dozens of these epicycles were needed to explain the facts.

Copernicus assumed that the sun, and not the earth, was the centre of our planetary system. This one assumption did away with the need for all the `unnecessary entities' of the epicycles, and gave birth to modern astronomy.

The rule of simplicity applies in religion too.

For as long as there has been religious speculation, gods have been used as an explanation for the existence of the universe. Moses and Mohammed applied Occam's razor to religion, and reduced a pantheon of Gods to one God.

Yet monotheism still retained two entities: God and the universe. Nor was it an explanation, since God's existence was accepted as a "mystery."

Pantheism asserts that the universe is self-sufficient, and accepts its existence as the ultimate mystery. It seeks for the most simple hypothesis, and replaces two universal entities with one, two mysteries with one.