Kabbalah - the oneness of God and creation

A history of pantheism* and panentheism by Paul Harrison.

Do not say "This is a stone and not God."
God forbid!
Rather, all existence is God,
and the stone is a thing pervaded by divinity. 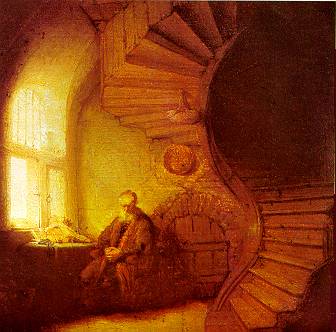 The Kabbalah is a system of esoteric and mystical Jewish thought which originated in Provence at the end of the 12th century and spread into Catalonia and Castile. Here, from around 1280 AD, Moses de Leon circulated and probably authored the Zohar, a commentary on the
Torah in the form of a mystical novel.

After the expulsion of Jews from Spain in 1492, other centres of kabbalistic studies emerged, including Fez, Venice, Salonika and Safed (now Zefat) in Palestine, where Moses Cordovero, (1522-1570) possibly the greatest systematic theologian of the Kabbalah, lived and taught.

The Kabbalah centres on a complex scheme of numerical symbolism and esoteric theology, influenced by neo-Platonism, Hermetic literature and perhaps Sufism. It is elaborate and bizarre, and sometimes seem as complex as Greek mytholoy. Kabbalists often insist that the schemes are not meant literally: they are symbols of a spiritual reality that is beyond human comprehension. Yet the detailed discussion of the sefirot and the diagrams of their links often gets so complex and artificial that the word "Cabala" came to be a synonym for obscurity and secrecy.

Underlying everything is Ein Sof, the infinite, undefinable origin of all things, the cause of causes. Ein Sof is often seen not as an old man with a white beard, not as a personal God at all, but as an
impersonal, unnameable Being without qualities, thoughts or feelings, very similar to
Lao Tzu's Tao or Meister Eckhart's "simple ground" beyond God.

The kabbalists did not see creation as God on the one hand making a separate universe on the other, but rather as Ein Sof emanating, almost like a thin balloon elongating, into successively lower layers. First into the first sefirot, Keter (the supreme crown), which in turn emanated into Hokhma (wisdom), and so on into Binah (intelligence), Hesed (love), Gevurah (might), Tif'eret (beauty), Netsah (eternity), Hod (majesty), Yesod (foundation), and Malkhit (kingship). Malkhit finally emanated into angels and all material things.

Ultimately all the sefirot and all the creation that emanates from them are one with Ein Sof. Moses Cordovero compares the process with water flowing through vessels of different colours - the water remains one and of one colour, though it appears to divide and to change colour. Everything is one, nothing exists but the one divine being. This position is very similar to that of the Sufi philosopher Ibn Al'arabi.

The idea is sometimes so strongly expressed that it seems pantheistic, yet there is still the insistence that though everything that exists is God and is in God, God extends infinitely beyond that. In this sense the kabbalah is panentheistic rather than truly pantheistic.


Non-duality: nothing exists but Ein Sof, the endless.

The essence of divinity is found in every single thing - nothing but it exists. Since it causes every thing to be, no thing can live by anything else. It enlivens them; its existence exists in each existent. Do not attribute duality to God. Let God be solely God. If you suppose that Ein Sof emanates until a certain point, and that from that
point on is outside of it, you have dualized. God forbid! Realize, rather, that Ein Sof exists in each existent. Do not say "This is a stone and not God." God forbid! Rather, all existence is God, and the
stone is a thing pervaded by divinity.
Moses Cordovero, Shi'ur Qomah.

Everything is catenated in its mystery, caught in its oneness … The entire chain is one. Down to the last link, everything is linked with everything else, so divine essence is below as well as above, in heaven
and earth. There is nothing else.
Moses de Leon, Sefer ha-Rimmon.

Nothing is outside of God. This applies … to everything that exists, large and small - they exist solely through the divine energy that flows to them and clothes itself in them. If God's gaze were withdrawn for even a moment, all existence would be nullified … Contemplating this, you are humbled, your thoughts purified.
Moses Cordovero, Or Yaqar.

When powerful light is concealed and clothed in a garment, ir is revealed. Though concealed, the light is actually revealed, for were it not concealed, it could not be revealed. This is like wishing to gaze at the dazzling sunn. Its dazzle conceals it, for you cannot look at its overwhelming brilliance. Yet when you conceal it - looking at it through screens - you can see and not be harmed. So it is with emanation: by concealing and clothing itself, it reveals itself.
Moses Cordovero, Pardes Rimmonim.

Ein Sof is beyond understanding or expression

Ein Sof cannot be conceived, certainly not expressed, though it is
intimated in every thing, for there is nothing outside of it. No
letter, no name, no writing, no thing can confine … Ein Sof has no
will, no intention, no desire, no thought, no speech, no action - yet
there is nothing outside of it.
Azriel of Gerona, Commentary on the Ten Sefirot.

Concerning Ein Sof there is no aspect anywhere to search or probe;
nothing can be known of it, for it is hidden and concealed in the
mystery of absolute nothingness.
David ben Judah he-Hasid, Book of Mirrors.

No letter, vowel or image can be applied to … Ein Sof, whom we
cannot depict, of whom we cannot speak, of whom we cannot posit either
judgement or compassion, excitement or anger, change or limit, sleep or
motion, or any quality whatsoever, either prior to the emanation or
now.
Moses Cordovero, Or Ne'erav.

is the belief that the universe is divine and nature is sacred.
It fuses religion and science, and concern for humans with concern for nature.
It provides the most solid basis for environmental ethics.
It is a religion that requires no faith other than common sense,
no revelation other than open eyes and a mind open to evidence,
no guru other than your own self.
For an outline, see Basic principles of scientific pantheism.

If you would like to spread this message please include a link to it in your pages. See also Help spread pantheism.